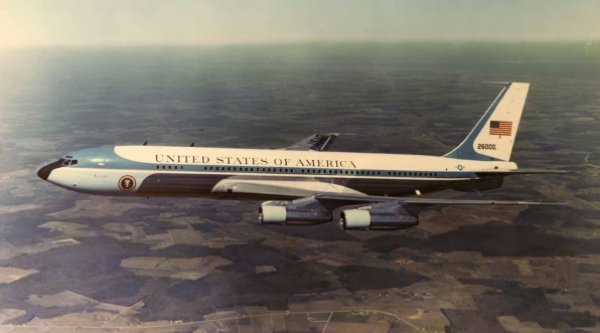 Trump would really hate it.

In 1962, legendary graphic designer Raymond Loewy offered to give Air Force One a new look. Of the several sketches that Loewy proposed, President Kennedy chose one with red and gold coloring–and asked that it be rendered in blue, his and First Lady Jackie Kennedy’s favorite color. President Kennedy’s choice has been an American emblem since. That is, until President Trump took office–and decided the classic design wasn’t “American” enough.

The San Francisco and New York-based design firm Collins has taken it upon itself to offer the president some new options. However, all of their designs are inspired by Loewy’s original one to preserve the designer’s legacy while giving Air Force One a modern update.

“Loewy nailed the design over 50 years ago,” Brian Collins, the co-founder and chief creative officer of Collins tells Fast Company via email. “It has withstood the test of time, as good design should. That said, when something must change, we begin all of our work by examining what came before, understanding what makes that idea so compelling over time. And then we try to build on those qualities to create something new.” The studio’s new ideas retain the elegant, aerodynamic lines of Loewy’s original, but with bolder colors. One is predominantly blue, with touches of red and white. Two others are similar-looking remixes with different combinations of the American colors. The fourth is the most fun: It looks like a rainbow–an exuberant celebration, perhaps, of the diversity that Trump derides?

Collins says his team wasn’t explicitly trying to recall the pride flag. “We don’t see it as a rainbow,” Collins says. “We see it as a sort of multi-colored tapestry that speaks to the variety of people, hopes, and ambitions that make up America. Considering that Air Force One might not be updated for another 55 years, we figured why not leverage some of Loewy’s streamlined gestures, but make it more… surprising?”