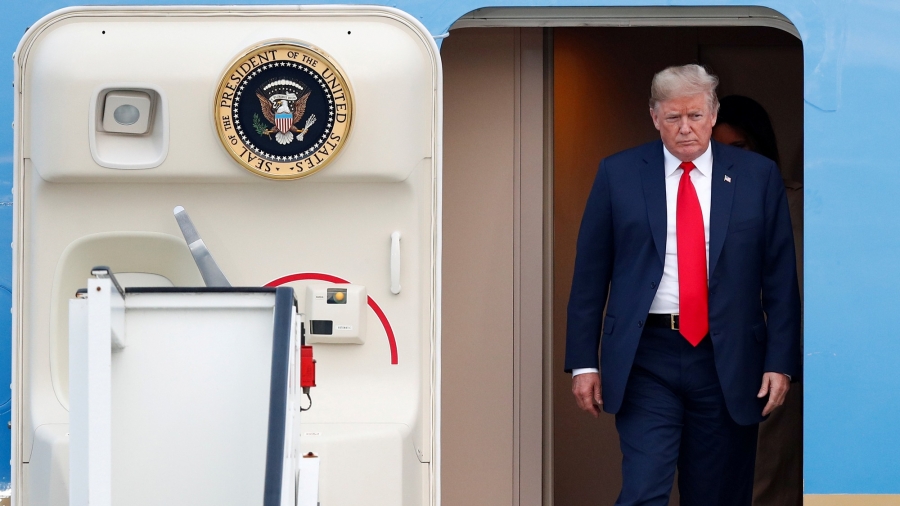 By DARLENE SUPERVILLE and DAVID KOENIG, Associated Press
WASHINGTON (AP) — President Donald Trump says Air Force One is getting a patriotic makeover.
Trump says the familiar baby blue color on the presidential aircraft will give way to a red, white and blue color scheme. Updated models could be in service before the end of a potential Trump second term.
“Air Force One is going to be incredible,” Trump told CBS News. “It’s going to be top of the line, the top in the world, and it’s going to be red, white and blue, which I think is appropriate.”
White House press secretary Sarah Huckabee Sanders said Wednesday that the Air Force awarded Chicago-based Boeing Co. a $3.9 billion contract for two presidential planes that will be ready in 2024. They will replace a pair of Boeing 747 jumbo jets that are now 31 years old.
The contract confirms a deal reached in February by Trump, the Air Force and Boeing. Sanders said the final price represented a savings of $1.4 billion from an initial contract proposal.
The presidential plane — it goes by the radio call sign of Air Force One when the president is on board — was once a Boeing 707 that had orange above and below the nose and “United States of America” painted on the sides in blocky, all-caps lettering.
According to Boeing history, first lady Jacqueline Kennedy picked new colors for the plane used by her husband, President John F. Kennedy. A swath of baby blue covers the nose and sweeps back along each side of the fuselage. The lettering was changed to a font inspired by the heading of the Declaration of Independence.
The livery was the work of French-born industrial designer Raymond Loewy, whose previous clients included Lucky Strike cigarettes and Studebaker cars. The Museum of Modern Art in New York describes his Air Force One design as modern and elegant.
The plane is immediately recognized around the world.
Trump said he began thinking about a redesign after reaching a deal for new planes.
Loewy wrote that President Kennedy picked the blue paint scheme over a red one. Some accounts said Kennedy rejected the Air Force’s red and gold theme because it looked too imperial.
David Hagerman, who was married to Loewy’s daughter and knew Loewy’s widow, said Mrs. Kennedy wanted Air Force One redesigned because she considered the old livery ugly. Dropping the baby blue now, he said Wednesday, “is an insult to the memory of Jacqueline Kennedy.”
“It’s a travesty to break from tradition and put a new paint job on the plane,” Hagerman said. “Air Force One is the No. 1 iconic symbol of America worldwide.”
The awarding of the final contract comes after more than a year of back-and-forth between Trump and Boeing over the cost of new planes.
Trump tweeted in December 2016, after he was elected but before taking office, that costs for the program were “out of control, more than $4 billion.” He added, “Cancel order!”
Boeing chief executive Dennis Muilenburg and Trump met several times to discuss the Air Force One contract. Boeing boasted that it was proud to build the new presidential planes, and it promised to give taxpayers a good deal.
Boeing said work including design, modifications and testing of two 747-8 planes will be done in San Antonio and is expected to be finished by December 2024.
___
Koenig reported from Dallas.